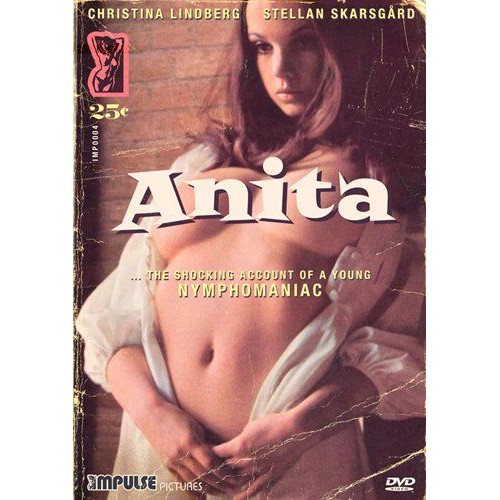 Anita: The Shocking Account Of a Young Nymphomaniac (Ur En Ton?Rsflickas Dagbok) (MAA023/1973)

A true report of a 16 year old nymphomaniac's behaviour.

Anita is a girl of only 16 years, and while she has developed early physically, to a mature woman, she is psychologically completly ruthless. Her relationship the her parents and her friends is very poor and she is regarded with contempt by the people around her, even by the men who so ruthlessly use her. During her troubles she meets Erik, a young psychology student. Gently and carefully he begins to dispell her psychological blocks. In the course of this treatment she reveals to him some of the shocking espisodes of her previous experience and how an inner compulsion forces her into humiliating debauchery in dangerous environments. Erik believes he has the solution to Anita's problems: to let her move into an artist's communal experiment, of which he is already a member. The common interest of this collective is largely the performing of classical music. Anita's prosence in the collective, however, is regarded by some of the other girls as highly provocative. Anita's nymhomania is her means of protest against her parents, school, society and her own enviroment (her whole life situation). Erik holds a scientific theory that Anita will be free of her sexual fixation if she were once able to experience a true orgasm. He therefore tries to get her to see clearly, and with some insight, the breadth of her psychological situation. Against the background of the intensive battle that Anita carries om with the self-destructive drives within her, grows the depth of feeling that bind her and Erik together. She is no longer simply a "case" for him. Anita discovers that Erik is the one man whom she both wants to, and can, remain together with...

Anita: The Shocking Account Of a Young Nymphomaniac (Ur En Ton?Rsflickas Dagbok) (MAA023/1973)