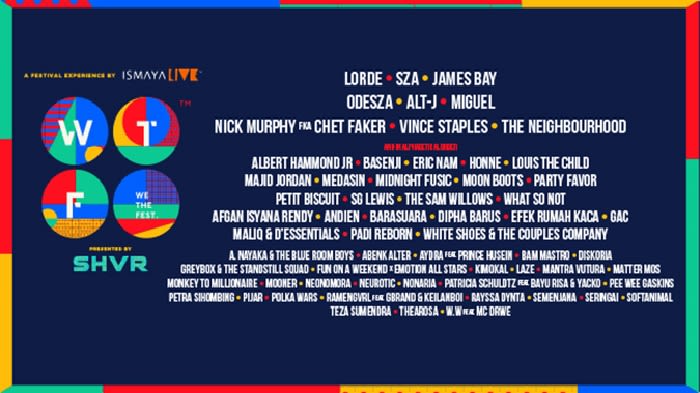 We The Fest is an annual summer festival of music, arts, fashion and food taking place in Indonesia's capital of Jakarta organized by Ismaya Live.

Indonesia's most exciting musical acts have also performed at the festival including Potret, NAIF, Scaller, Barasuara, Sheila on 7, Raisa, The Trees and the Wild, Ramengvrl, Elephant Kind, and Stars & Rabbit amongst many.

In 2017, We The Fest was held for 3 days for the first time ever and welcomed more than 50,000 festival-goers from around the globe over three days including the president of Indonesia, Joko Widodo.

Described as "a classy festival" by Vicefor its friendly vibe and how slickly it has been organized, the festival is a pioneer of its kind in the Southeast Asian festival scene with elements such as arts, fashion and food presented through various whimsical activations and zones festival-goers can experience and explore.